skip to main | skip to sidebar

We Need to Point Something Out

What do I mean by alive? Well, we are no longer posting our blogs here. We are posting them to our website, which is powered by WordPress. The RSS feed for all blog activity is here. However, you should definitely check out our new website.

We added a calendar and loads of pictures. Every ride we go on will be announced on Twitter (sorry if you hate Twitter, but it works so well for this purpose). All the newest posts will be on the front page of the new site. It is an exciting step for us. Plus, you can comment on pretty much everything that you would want to, including products.

Our latest ride (from yesterday) is on the new website. We even included a Google Earth file for you to see all the subtleties of the ride Phillip and I (scott t.) took.

All this, we hope, adds up to more fun for all cyclists. Thank you for reading and keep the suggestions coming!

Posted by Salvagetti Bicycle Workshop at 11:26 AM No comments:

Phillip and I (Scott T.) just rode from the shop to Big Phil's house. Big Phil lives out at Monaco and Alemeda. It is definitely not a long haul. It was nice and pitch black, except for when a car would be lurking behind us. I mentioned that I loved when I felt like a kid on my bike, so we began a little list to define when riding feels like you are a kid (again) or when it is too serious. We came up with some ground rules for when it feels like you are a kid, and as a general rule, it seems like an adult ride when the opposite is true:

To feel like a kid:
1. You don't have to be in a car in order to ride. Examples - Races, far away mountain rides, driving to Washington Park for laps.
2. You don't know exactly where you are going. This does not have to include getting lost.
3. You aren't in a hurry.
4. You aren't in serious ride clothes (though sometimes that just happens).
5. When you don't discuss anything about the bikes you are on.

This is not to say we don't love adult style rides, but sometimes it is nice to just pedal along like school is out.
Any rules you need to add should be thrown into the comments.
Posted by Salvagetti Bicycle Workshop at 8:45 PM 4 comments:

Brian and I went to Palmer Park yesterday. We met one of our friends, Scott N., who promised us a tough, but not TOO tough tour of Palmer Park.

We ended up each wrecking several times. After clearing something that I didn't think I would make, I found small rocks to stop me in my tracks. Brian and Scott both had little pedal issues that caused little problems. We had NO FACE PLANTS, which is always a plus.

At the completion, we went to The Curry Leaf in CO Springs. Highly highly highly recommended. Great after ride meal. They need to have cots for nap time after. 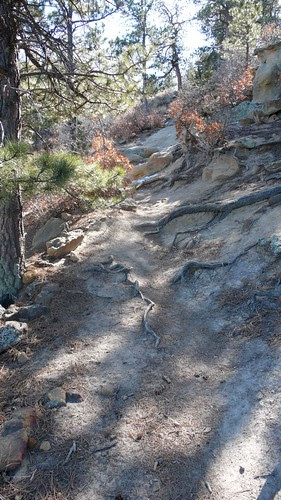 47 Photos right here!
Posted by Salvagetti Bicycle Workshop at 7:07 AM No comments:

Yeah. It has a movie camera.
And yeah, that is a light.
And if you aren't able to speak, the sticker is a good start to find help for you.
We think we may have nailed it.
Posted by Salvagetti Bicycle Workshop at 10:45 AM 3 comments:

Pueblo was hot on Wednesday. by scott t.

Brian, Chris, Lorraine and I went to Pueblo for a mountain bike excursion. Did we mention that the weather was warm?

We had been been warned that the trails would be dry and possibly super fun. None of us had been there before.

The ride started out on a high note with a fast rolling, lots of curves downhill. Not really downhill, but not flat or uphill. It was great. We were following a map that was to say the least, not accurate. Maybe we shouldn't even say following. As we got to the bottom of the map, we knew it wasn't quite right. There were signs posted that weren't included with the map. So, we went left instead of right (always go right). This was a super duper long cut. We *had* decided a distance that we could cover in a reasonable amount of time. But, with the wrong turn we went a lot further than planned.

Long story short, we had a good time. That is until we all ran out of water. Chris especially was hurting. The rest of us just stopped sweating. This was noticed as we once again had a good idea of where we were and where we wanted to go. These trails were interesting because when they were technical, they were super duper fun and technical. When they weren't, they were dusty dirt and shale. It was definitely a practice at knowing what speed you like before you go through a turn.

We made is safely back to the car and went immediately to recover with some pizza and water. (Chris slept most of the way home)

This is where we were, but we didn't listen to this music.

We stumbled upon this article of interest today:

Apparently in Australia, it goes a little something like this:

In America, we rarely see an article about a drive to work that is without incident, but a car crash is a whole different story!

The economy is a car crash with flames and kabooms.

Keep your eyes forward and don't rubberneck and we will all come out on the other side.
Posted by Salvagetti Bicycle Workshop at 1:29 PM 2 comments:

This morning, I went through my old photos that I took at random times and it occurred to me that many of our current customers have no idea what Salvagetti looked like when we were much younger. 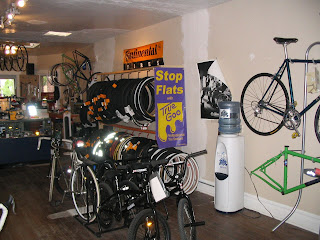 When we started out, we didn't have new bikes for sale, which often times made people walk in the store and walk right back out. They had heard we were nice people, but weren't sure about the name and what we stood for. 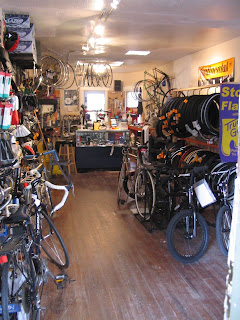 Every single piece of inventory was out where you (and I) could find it. If you didn't see it, we didn't have it. But, surprisingly, we usually did. Pure luck? 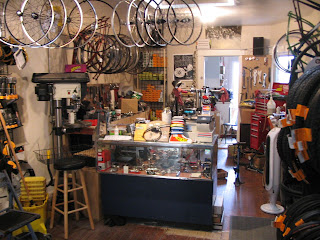 Salvagetti started out as Fix My Bike, but moved on to Salvagetti Bicycle Workshop in a unanimous vote of Scott's Wife, Brother and Brain.

It is strange, because I have many photos of this location, but almost none of the *even smaller* one we had before. We were only there for about 3 months before we found a better location (313 W. 11th). And only a little over a year later we moved on to 1234 Speer Blvd.. What a roller coaster ride! 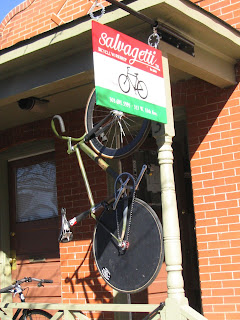 Posted by Salvagetti Bicycle Workshop at 7:36 AM 3 comments:

Salvagetti Bicycle Workshop
Denver, CO, United States
Salvagetti, pronounced "Sal-va-jet-tea", is located at 1611 Platte St in Denver, CO. Reach us at 303.691.5595. We are a speciality bicycle shop that services *most kinds* of bikes. We sell only quality made, fun to ride, easy to love bicycles and accessories. We like our jobs, we like our customers. All of this means you will probably appreciate our shop, unless you need that big attitude. Come in and see us.